A History of The Infinite 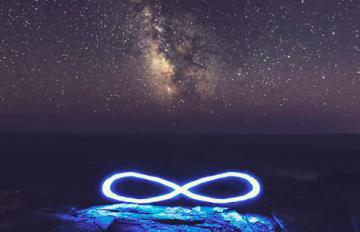 Adrian Moore’s radio series is entitled ‘A History of The Infinite’. It was broadcast each weekday between Monday 19th September and Friday 30th September, from 1.45 p.m. to 2 p.m., on Radio 4, and it told the story of evolving conceptions of the infinite over the past two and a half thousand years. All aspects of the topic were covered: the philosophical, the mathematical, the scientific, and the theological. Each programme included interviews with experts in the field.

The first four programmes were concerned with the remarkable turnaround between the time of the early Greeks, when various puzzles and paradoxes associated with the infinite had made it an object of abhorrence and distrust, to the early modern period, by which time it had come to be associated with the divine and had become an object of veneration and awe. In the next three programmes listeners were introduced to some of the extraordinary mathematical results concerning the infinite, including the discovery that some infinities are bigger than others. In the final three programmes attention shifted to the cosmos and our place in it. Adrian considered questions about the age and size of the universe, about death and immortality, and about our basic urge to seek meaning for our lives in something infinitely greater than us.

Horror of the Infinite.  Adrian Moore begins his journey through philosophical thought on infinity and explores why the notion made the Ancient Greeks so uncomfortable.

Aristotle’s rapprochement.  In the second part of his journey through philosophical thought on infinity, Adrian Moore finds out how Aristotle tried to make the notion acceptable.

The Infinite and the Divine. In this episode Adrian Moore finds out how the medieval church’s attempt to stamp its authority on the debate led to some explosive disagreements.

The Infinite and Human Experience.  Adrian Moore’s series reaches the verge of modern thought, and us humans: how can we, relying on our finite powers, grasp the idea of infinity?

The Mathematics of the Infinitely Small.  Adrian Moore introduces us to the sometimes turbulent world of mathematics and explains its role in thought about infinity.

The Mathematics of the Infinitely Big.  Adrian Moore introduces us to the struggles of the mathematicians who tried to find a way of reckoning with infinity.

Crisis and Uncertainty.  Adrian Moore meets a nun who cannot decide whether to pray for herself and describes how mathematics came up against our inherent limitations.

The Cosmos. In this episode Adrian Moore reaches into space.  Does it go on for ever? Are there infinitely many stars? Adrian consults ancient and modern thought about the universe.

Death and Immortality: Do we want to live for ever? Adrian Moore ponders our own finite nature and tells us the story of Elina Makropulos and the choice that faced her.

Where does this leave us? Adrian Moore concludes his series by considering what contemplation of the infinite has told us about ourselves and our place in the universe.