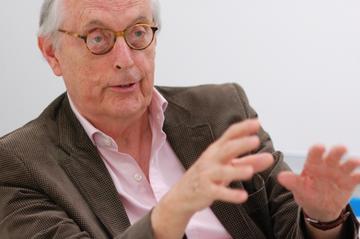 The Faculty is sad to report the death of James Griffin on 21 November 2019.

Jim was born in the United States in 1933, and educated at Choate School, Wallingford, Connecticut. He took his BA at Yale in 1955, and then came to Corpus Christi College, Oxford, as Rhodes Scholar from 1955-58. After two years as a Senior Scholar at St Antony’s, he took his DPhil. in 1960. His supervisor had been Gilbert Ryle, and Jim recalled Ryle’s remarking of Yale that it was ‘where they have the zoo theory of teaching philosophy: one of each species’.

Jim then held a Lecturership at Christ Church, until appointed to a Fellowship at Keble College. After thirty years he returned to Corpus to occupy the White’s Chair of Moral Philosophy from 1996 to 2000. His later positions included a Distinguished Visiting Professorship at Rutgers University and an Adjunct Professorship at the Centre for Applied Philosophy and Public Ethics in Canberra.

Jim published five books, all with Oxford University Press: Wittgenstein’s Logical Atomism (1964), Well-Being (1986), Value Judgement (1996) On Human Rights (2008), and What Can Philosophy Contribute to Ethics? (2015). Jim loved, and was highly knowledgeable about, art. In his last years, he was working on a book which he saw as a contribution to our understanding of paintings rather than to technical philosophical aesthetics.

It was partly Jim’s interest in Frank Ramsey and decision theory that led him into thinking about ‘utility’ or well-being. He always had a healthy scepticism about philosophical pigeon-holes, and developed an account of well-being that combined elements of desire-accounts and of objective list theories. He also thought post-Cartesian moral philosophy was excessively ambitious, and his third and fifth books in particular sought to clarify the limits of the subject.

His open-mindedness, insightfulness, and creativity have left a remarkable and suggestive oeuvre, and those same qualities, along with his kindness and charm, made him both a brilliant and popular tutor and supervisor, and an outstanding colleague.

Jim lost his beloved wife, Catherine, very shortly after his sixtieth birthday – ‘a day’, he said, ‘I shall never forget’. He doted on his children and grand-children, and hugely enjoyed spending time with them, other relatives, and his many friends. He listed his recreations in Who’s Who as ‘eating, drinking’, but what he perhaps most enjoyed was the company of others. Even towards the end of his life, as his dementia worsened, he remained cheerful and interested in the world, often remarking how blessed he felt himself to have been.