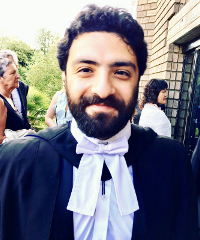 I am a DPhil Philosophy candidate at Oriel College, supervised by Prof. Roger Crisp and Prof. Timothy Williamson. My research has been generously funded by an Arts and Humanities Research Council Studentship. My work is primarily in (meta-)metaphysics, moral philosophy, and their intersections. These interests combine in my doctoral thesis entitled 'Why We Cannot Be Quiet About the Metaphysics of Normativity'.

In Hilary Term 2020, I delivered a series of lectures entitled Key Topics in Recent Meta-Ethics. I have also tutored Ethics, Knowledge and Reality, Moral Philosophy: Mill's Utilitarianism, Philosophy of Logic and Language, Philosophy of Cognitive Science, and a series of tutorials in meta-ethics.

Akhlaghi, F. (2020). 'On Moral Obligations and Our Chances of Fulfilling Them'. Ethical Theory and Moral Practice, pp. 1-14