The Institute for Ethics in AI will bring together world-leading philosophers and other experts in the humanities with the technical developers and users of AI in academia, business and government. The ethics and governance of AI is an exceptionally vibrant area of research at Oxford and the Institute is an opportunity to take a bold leap forward from this platform. The Institute will be administratively located in the Faculty of Philosophy and will be housed in Oxford University's Schwarzman Centre for the Humanities. Below you can hear Sir Nigel Shadbolt, (Principle of Jesus College, Department of Computer Science) discussing the background and aims of the Institute for Ethics in AI. 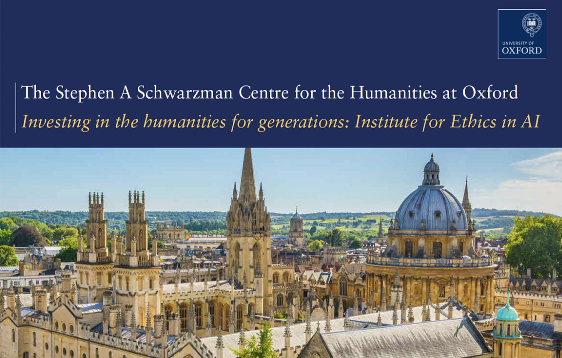 Oxford contains the largest group of philosophers in the UK and one of the largest in the world. There is an enormous range and depth of current expertise in the design and use of machine learning, the public policy issues of developing and applying AI, and the normative agendas and consequences of AI innovations. This expertise is dispersed, and as the Institute gathers momentum and a sustainable rhythm of cross-disciplinary appointments, events and policy conversations develops, we expect significant new synergies will come from the interactions among and between the world's brightest students and most innovative researchers.
Below you can listen to a selection of podcasts. Firstly, from Carissa Véliz discussing the place of philosophy in the ethics of AI. Following on are podcasts from four major centres and institutes at Oxford, introducing how ethics in AI brings about interesting debates within their specialised areas of research.

The place of philosophy in the Ethics of AI, Carissa Véliz (Associate Professor in Philosophy)

Following on with more podcasts here...

Following on with more podcasts here...

'Science can tell us the consequences of our actions but it does not tell us which goals we should pursue or what sacrifices are justified to achieve them. In so far as we are going to have AI as part of the technological solution to societal challenges, we inevitably have to address the ethical questions too. AI ethics is a way to get clearer about the value judgements involved and to encourage a more rigorous and inclusive debate.'

The Ethics in AI Seminar series brings together experts from a wide range of academic disciplines at Oxford to discuss the ethical challenges posed by AI.

Over the last decade, concerns about the power and danger of Artificial Intelligence have moved from the fantasy of ‘Terminator’ to reality, and anxieties about killer robots have been joined by many others that are more immediate. Robotic systems threaten a massive disruption of employment and transport, while algorithms fuelled by machine learning on (potentially biased) ‘big data’ increasingly play a role in life-changing decisions, whether financial, legal, or medical. More subtly, AI combines with social media to give huge potential for the manipulation of opinion and behaviour, whether to sell a product, influence financial markets, provoke divisive factionalism, or fix an election. All of this has raised huge ethical questions, some fairly familiar (e.g. concerning privacy, information security, appropriate rules of automated behaviour) but many quite new (e.g. concerning algorithmic bias, transparency, and wider impacts).

Oxford has a wealth of researchers in relevant fields, scattered through numerous University departments – including Philosophy, Computer Science, Engineering, Social Science, and Medicine – and also a wide range of specialist ‘centres’ and ‘institutes’. But hitherto, this rich number and variety of researchers has tended to lack any integrating focus, with those in one part of the University sometimes unaware of those elsewhere, even while working in closely cognate areas. It is against this background that Oxford created the Institute for AI Ethics, to promote broad conversation between relevant researchers and students across the entire University, and thus to generate a coherent powerhouse of AI Ethics which will be more than the sum of its (already impressive) parts. Seminars are the first formal activities of this new initiative, but we envisage them as an ongoing part of it, inspiring and nurturing interdisciplinary discussion and collaboration into the future.

Our academic team is busy producing new research and forging academic and industry collaborations, tackling the big topics in AI.

Join us during our virtual events, by posting your comments and questions to the panel. All our upcoming events are on the events page. Any events you miss can be viewed from our past events page.

The Institute will bring together academics and their expertise in all areas of Ethics in AI with regular podcasts, seminars and events.To receive alerts for the upcoming live events, you can subscribe to the Institute for Ethics in AI YouTube channel.

The recordings of all our events are stored on this page for anyone to view at your leisure.

You may also be interested in viewing these recordings from other AI Events.

Recent publications by the Institute for Ethics in AI academic team are: