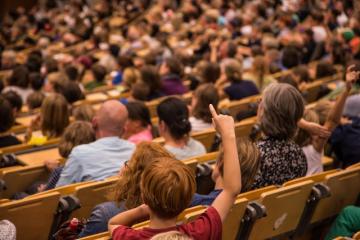 Last month Ana Laura Edelhoff gave a lecture on distributive justice as part of the "Kinderuni" series (university for children), organised by the University of Hamburg and the Claussen-Simon-Stiftung, which aims to make academic research accessible to children. The lecture, which was attended by 1200 children between the ages of 8 and 12 as well as their parents and teachers, introduced various accounts of justice and discussed them critically with the children. The children were fascinated by the topic and actively participated in the discussion, suggesting various modifications to the theories and proposing their own approaches.

Ana Laura Edelhoff is a Mary Somerville Research Fellow in Philosophy at Somerville College. She was previously a teaching fellow in philosophy (wissenschaftlicher Mitarbeiter) at the University of Tübingen (2016-2017) and at the University of Hamburg (2017-2018). Her research focuses on ancient philosophy (especially Aristotle’s and Plato’s metaphysics and ethics) and contemporary ethics (especially virtue ethics, philosophy of education and moral psychology).

For further information about the project see: https://www.uni-hamburg.de/wissen-fuer-alle/kinder-uni/partner.html