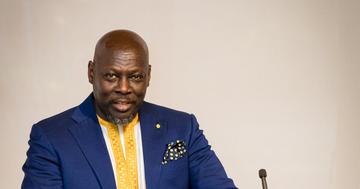 The Isaiah Berlin Lecture was launched in 1990 to celebrate the 80th birthday of the College's Founding President, Sir Isaiah Berlin, made possible thanks to an endowment gift from the Rothschild Foundation. The lecture traditionally takes place each Trinity term and is in Berlin’s own field of study, the history of ideas. Past speakers include Professor Amartya Sen, Professor Roy Foster, Professor Timothy Garton Ash, Michael Ignatieff and Baroness Helena Kennedy.

The next Berlin Lecture will take place at 6pm on Thursday 19 May (Thursday in Week 4) with Professor Ato Quayson, Stanford University, who will be delivering a lecture entitled ‘Disputatiousness and Unruly Affective Economies: From the Greeks to Postcolonial Tragedy’ (abstract below).

We invite everyone to join us at the lecture in the Leonard Wolfson Auditorium where seating will be available with and without social distancing. Guest Night will follow in Hall, bookable via the Wolfson Gateway in the usual way.

The lecture will also be livestreamed on YouTube for those who cannot attend in person, link to follow on the website when the glitch with the event’s listing has been fixed. Those who attend in person are asked to consider wearing a face covering.

Disputatiousness and Unruly Affective Economies: From the Greeks to Postcolonial Tragedy

This lecture will pick up on an element of literary tragedy that was raised in Tragedy and Postcolonial Literature but was not fully elaborated, namely, the place of disputatiousness in the history of tragic form and how this might help us to understand tragedy in world literature.  The Greeks give us great examples of disputatiousness: Oedipus vrs. Tiresias, Clytemnestra vrs Agamemnon, Medea vrs Jason, and Antigone vrs Creon, among others.  But the determining mark of the Greek tragic characters was what might be described as their zero-sum wrath.  Their sense of rightness goes as far as courting possible self-destruction.

My understanding of this mode of disputatiousness is different from what Hegel lays out in his discussion of tragedy in The Phenomenology of Spirit and Lectures on Aesthetics. Rather, I side with Jean Pierre-Vernant in reading Greek tragedy as illustrating the incomplete transition between religious and ethical discourses, such that concepts such as dikē (justice), nómos (law and custom), and ethos (the fundamental character or spirit of a culture) all come to do double service and are thus articulated by individual characters as the subjects of life-and-death disagreements.

Disputatiousness takes on a different guise in Shakespeare, where the more disputatious plays such as Coriolanus and Titus Andronicus are not considered among his most profound.  Rather, in the big tragedies of Hamlet, King Lear, Othello, Macbeth, and Antony and Cleopatra, historical disputatiousness is aligned to unruly affective economies.  It is the link between the two domains of history and affect that marks Shakespeare as modern and from which we can derive a model for understanding the characterological types and their socio-political conditions in postcolonial tragedy.

The lecture will proffer a broad theory of postcolonial tragedy drawing examples from different literary traditions and cultures, but will specifically focus on the rural novels of Chinua Achebe (Things Fall Apart and Arrow of God), Toni Morrison’s Beloved, and the work of JM Coetzee, among others.