Ethics in AI Colloquium with Richard Susskind: Must Legal Trials be Face to Face 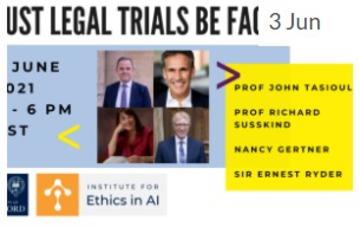 Professor Richard Susskind OBE is President of the Society for Computers and Law, Chair of the Advisory Board of the Oxford Internet Institute, the founder of Remote Courts Worldwide (www.remotecourts.org) and, since 1998, has been Technology Adviser to the Lord Chief Justice of England and Wales. He chaired the Online Dispute Resolution Advisory Group of the Civil Justice Council (2014-2015). Professor Susskind has been working on law and technology for 40 years and is the world’s most cited author on the future of legal services. His work has been translated into 18 languages and he has been invited to speak in more than 60 countries. He has written ten books, including Tomorrow’s Lawyers (2013, 2017), and Online Courts and the Future of Justice (2019). In the 1980s, he wrote his doctorate on artificial intelligence and the law at Balliol College, Oxford.

Nancy Gertner is a former U.S. federal judge who built her career around standing up for women’s rights, civil liberties and justice for all. Gertner was appointed to the federal bench of the U.S. District Court of Massachusetts by President Bill Clinton in 1994. She retired from the bench in 2011 to teach at Harvard Law School.

Named one of “The Most Influential Lawyers of the Past 25 Years” by Massachusetts Lawyers Weekly, Gertner has written and spoken throughout the U.S., Europe and Asia. She has published widely on sentencing, discrimination, and forensic evidence; women’s rights; and the jury system. Her autobiography, “In Defense of Women: Memoirs of an Unrepentant Advocate,” was published in 2011.

Sir Ernest Ryder is a distinguished member of the judiciary, who has also served the higher education sector and the wider community in a variety of capacities. Educated at Bolton School and Peterhouse, Cambridge, Sir Ernest was called to the bar in 1981 and became a QC in 1997.  He was appointed a Justice of the High Court in 2004 and was both the Presiding Judge of the Northern Circuit and its Family Division Liaison Judge. He was the judge in charge of the modernisation of family justice that led to the creation of the Family Court.

He has research interests in a variety of socio-legal areas, and is a Visiting Fellow at Nuffield College Oxford, as well as sitting on the Advisory Boards of various European Institutes and Universities on research concerning access to justice.  On his arrival in Oxford this summer Sir Ernest will become a Senior Associate of the Centre for Socio-Legal Studies in the Department of Law.

As a Trustee of the Nuffield Foundation, Sir Ernest has worked with colleagues to develop a sustainable model for research in justice, welfare and education, and to integrate quantitative and economic work into many of the Foundation’s justice projects.  He is the Chair of the Administrative Justice Council and holds Honorary Professorships at the Universities of Lancaster and Bolton.

Between 2014 and 2017 Sir Ernest was Chancellor of the University of Bolton, and he continues his involvement in his home area as a Deputy Lieutenant of Greater Manchester.