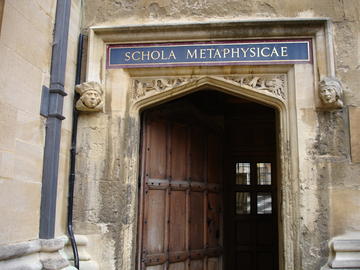 Alex Moran (Oxford): 'Some Thoughts on (Not Surviving) Fission'

What's really wrong with unique survivor accounts of fission and the like? Not that the only a and b rule or the intrinsically of persistnece is violated, since persistence is in fact provably not intrinsic (i.e. the only a and b rule is false). And not, as Hawley (2006) claims, that we end up violating a Humean principle - with distinct existences determining each other's fates. After all, the bad views of fission that I want to criticise would be just as bad even if the Humean view that Hawley relies on turned out to be false, e.g. even if we lived in Bradley's universe with all things fundamentally interrelated. What then is the issue? Conjecture: a certain kind of constitutive action at a distance is the problem. Wiggins writes, when introducing his only a and b rule that he calls (Dx), that “[w]hat we need...is for a having [persistence-determining relation] R to b [to be] such that objects distinct from a and b are irrelevant to whether a has R to b." (Wiggins 1980: 96). In fact, however, what we actually need is for it to be so that objects distinct from a and b are irrelevant to whether if a has R to b then this makes it the case that a persists as b. Or, better, and as Ralf Bader points out in recent work, we should not really talk of a standing in some relation R to b at all. Rather, we should speak of some condition PHI on a such hat when it obtains, this guarantees a's continued existence. What we must then do is prevent fission offshoots undermining a's continued existence even when condition PHI obtains (we also must rule out views on which part of the condition phi on a's survival is that there be no such fission offshoots....). Otherwise, we've problematic action at a distance of a constitutive rather than causal but equally spooky kind. That at least is the basic if for now rather vague conjecture that I want to make.

That's part 1. Part 2 draws out some interesting results about what happens in fission cases if we accept the widely held principles that;

(These being instances of widely accepted necessitation principles of ground)

The results we can get from these principles are boring depending on how 'R" is specified. But on reasonable specifications, where 'R' is what I will call 'reasonably intrinsic', one fun result is that given these principles, we get double survival in fission cases - and not in the sensible temporal parts way. We're talking more like bi-located saints, or the transcendental subjects "looking out of two sets of eyes" (as in Mark Johnston in 'Fission and the Facts'). That is, we get x at t1 = y at t2 = z at t2, even though y and z appeared to be distinct.

In order to receive the papers and be invited to the MS Teams meeting, please join the mailing list by emailing one of the convenors below. You are all very welcome, and we are grateful for support in this new initiative!