Righteous Anger: a symposium celebrating the lives of Michael and Ann Dummett 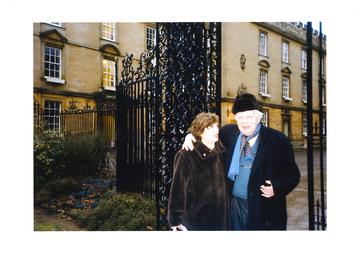 The Warden and Scholars of New College, together with the Faculty of Philosophy and the Department of Politics and International Relations, invite you to a Symposium in celebration of the lives of Michael and Ann Dummett, on Friday 19th November 2021, from 2pm until 6pm, in the McGregor Matthews Room at New College, followed by a Drinks Reception in the Red Room.

Professor Sir Michael Dummett died in December 2011, and his wife Ann on 7th February 2012. This event is focused on Michael, but also commemorates Ann, and their joint contribution to the struggle against injustice in the areas of race and immigration.

Michael Dummett is recognised as a philosopher of huge stature. But his role in British politics and social thinking is also critically important, if not enough remembered. Nor has it been much related to his academic life.

Prior to events in 2025, which will celebrate both his birth and his role as a philosopher, this Symposium seeks to explain and contextualise him as someone whose righteous anger against racism in our society found its way into many practical, and often courageous, actions - well beyond what normally would be expected of an Oxford academic.

If you are able to attend, either in person or on line via Microsoft Teams, you can register your interest in this event here.