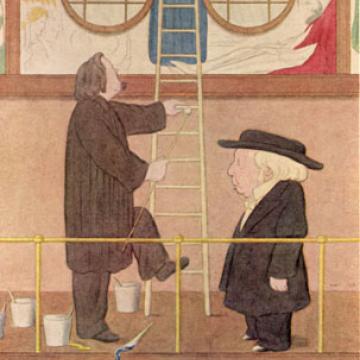 One strand in the metaphysics of reference gives a starring role to metaphysically elite (“natural”) properties. According to the folklore-Lewisians, the correct interpretation of an agent is one which optimizes a trade off between charity (understood, for example, as maximizing the truth of her thoughts or utterances so-interpreted) and eligibility (understood, for example, as maximizing the aggregate eliteness of the properties assigned to concepts or predicates). Recently, several authors (Pautz, Schwarz, Weatherson) have suggested a quite different view, in exegesis of Lewis himself. On this view, the correct interpretation of an agent is one that makes best-sense for an agent’s actions in light of their experiences, where “making sense” is not to be understood solely in terms of formal or structural rationalization. instead, to make sense of an agent we have to interpret them as satisfying involve thicker, content-specific norms.

In my own work I have been looking at how to best formulate this “substantive” version of radical interpretation, and what it can predict and explain across a range of specific areas—from the denotation of moral terms, to the interpretation of (apparently) unrestricted quantifiers, to the theory of singular reference. In this paper, I look at one particular aspect, linking back to the folklore-Lewisian story. The suggestion in the nascent literature is that a metasemantic role for elite properties falls out of substantive radical interpretation, if we pay attention to the consequences of substantive epistemic norms of inductive reasoning. The idea is this: Goodman taught us that enumerative inductive inferences must be restricted to the projectable properties, and so to make sense of an agent who is indulging in induction, we will interpret the target concepts as denoting projectable properties. If we independently agree that the projectable properties are just those that are elite enough, then we will have an explanation about why (at least for certain concepts) metaphysically elite properties are ‘reference magnets’.

Well, perhaps! I’ll be having a look at what we might say about induction, and the impact this has on substantive radical interpretation as I understand it. The aim is to determine the terms of exchange between these first-order epistemic issues and the metaphysics of mental content.