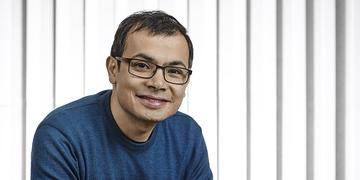 Oxford University’s Institute for Ethics in AI is delighted to invite you to 'Using AI to Accelerate Scientific Discovery', which is part of The Obert C. Tanner Lectures on Artificial Intelligence and Human Values.

Book your seat now on Eventbrite

Demis Hassabis is the Founder and CEO of DeepMind, the world’s leading AI research company, and now an independent subsidiary of Alphabet. Founded in 2010, DeepMind has been at the forefront of the field ever since, producing landmark research breakthroughs.

His work has been cited over 70000 times and has featured in Science’s top 10 Breakthroughs of the Year on four separate occasions. He is a Fellow of the Royal Society, and the Royal Academy of Engineering. In 2017 he featured in the Time 100 list of most influential people, and in 2018 he was awarded a CBE.

The past decade has seen incredible advances in the field of Artificial Intelligence (AI). DeepMind has been in the vanguard of many of these big breakthroughs, pioneering the development of self-learning systems like AlphaGo, the first program to beat the world champion at the complex game of Go. Games have proven to be a great training ground for developing and testing AI algorithms, but the aim at DeepMind has always been to build general learning systems ultimately capable of solving important problems in the real world. I believe we are on the cusp of an exciting new era in science with AI poised to be a powerful tool for accelerating scientific discovery itself. We recently demonstrated this potential with our AlphaFold system, a solution to the 50-year grand challenge of protein structure prediction, culminating in the release of the most accurate and complete picture of the human proteome.

About The Obert C. Tanner Lectures on Artificial Intelligence and Human Values

The Tanner Lectures were established by the American scholar, industrialist, and philanthropist, Obert Clark Tanner. In creating the lectureships, Professor Tanner said: "I hope these lectures will contribute to the intellectual and moral life of mankind. I see them simply as a search for a better understanding of human behaviour and human values. This understanding may be pursued for its own intrinsic worth, but it may also eventually have practical consequences for the quality of personal and social life."

This event is organised by the Institute of Ethics in AI. For more information and any updates please check this website.