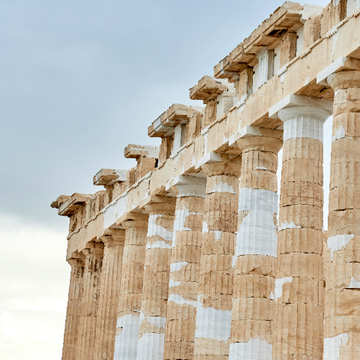 Katja Maria Vogt will give the 11th John Ackrill Memorial Lecture in the Lecture Room of the Radcliffe Humanities Building. The title of her lecture will be ‘Three Euthyphro Problems’ (abstract below). A drinks reception will follow the talk.

From next week (Week 7), the Workshop in Ancient Philosophy will run as normal.

Katja Maria Vogt (Columbia University) specializes in ancient philosophy, ethics, and normative epistemology. In her books and papers, she focuses on questions that figure both in ancient and contemporary discussions: What are values? What kinds of values are knowledge and truth? What does it mean to want one's life to go well? She is a recipient of the Columbia Distinguished Faculty Award, and currently works on externally funded projects on Agency Imagination and Dogmatism and Skepticism. Before coming to Columbia, Vogt taught at the Humboldt University Berlin, both in the Philosophy Department and at the Charité Medical Faculty. She was the Class of 1932 Fellow in Classical Philosophy at Princeton University and co-taught Masterclasses at the University of Cambridge and Hochschule für Philosophie in Munich. Vogt is the author of numerous articles, and of these books: Desiring the Good: Ancient Proposals and Contemporary Theory (Oxford 2017); Belief and Truth: A Skeptic Reading of Plato (Oxford 2012, paperback 2015); Law, Reason, and the Cosmic City: Political Philosophy in the Early Stoa (Oxford 2008, paperback 2012); Skepsis und Lebenspraxis: Das pyrrhonische Leben ohne Meinungen (Alber 1998, paperback with new additional chapter 2015). She is the editor of Pyrrhonian Skepticism in Diogenes Laertius: Pyrrho (DL 9.61–116). Text and Translation (Greek-English) with Commentary and Essays (SAPERE Vol. XXVII, 2015). She is an editor of Nous and serves on the editorial boards of the Journal of Philosophy, Apeiron, and Rhizomata, and as Associate Editor for philosophy of language, epistemology, and logic of Dialogoi: Ancient Philosophy Today.

Professor John Lloyd Ackrill, a leading figure in the study of Ancient Greek philosophy, joined Brasenose College in 1953 and became Professor of the History of Philosophy at Oxford in 1966. He published widely on Aristotle and Plato and, for over 40 years, he edited the Clarendon Aristotle Series, which are translations of Aristotelian texts accompanied by philosophical commentaries. The John Ackrill Memorial Lecture, inaugurated in 2009, is held in honour of the outstanding contribution he made to the study of ancient philosophy. The previous speakers are: Terence Irwin, David Wiggins, Richard Sorabji, Gisela Striker, David Charles, Gail Fine, Gábor Betegh, Lindsay Judson, Richard Kraut, and Mary Margaret McCabe.

The so-called Euthyphro Problem raises the following question: do the gods love the pious because it is pious, or is the pious pious because it is loved by the gods? The traditional reading draws on Divine Command Theory: does God recognize value, or is value created by divine approval? A contemporary version rephrases the problem along similar lines: is value attitude-independent or is it conferred by attitudes? I argue that these approaches obscure the dialogue’s argument by reformulating “the” Euthyphro Problem as if all value had the same metaphysics. According to the Euthyphro, however, there are three kinds of value, exemplified by the good, the god-loved, and the pious. Among these values, the good has priority. This comes into view once we see that there is not one Euthyphro Problem, but three. The Epistemic EuthyphroProblem seeks a measure by which disagreement about the good can be resolved. The Bad Gods Problem asks how the gods can be normative guides, given that they fight and disagree with each other. The Metaphysical Euthyphro Problem, as I call “the” Euthyphro Problem, raises the question of whether a property can at the same time be realist and constitutively involve relational attitudes. On this reconstruction, the Euthyphro is the urtext of metaethics, in ways that go far beyond its common reception. Plato’s three kinds of value accommodate, I argue, many of the intuitions that today we think speak for and against realism, and for and against anti-realism. According to the Euthyphro, realist value is prior, but it is not the only kind of value that orients our actions. There is also anti-realist value such as the god-loved and legal, and realist/anti-realist value such as the pious and the lawful.

There will be drinks following the lecture, to which all are invited.