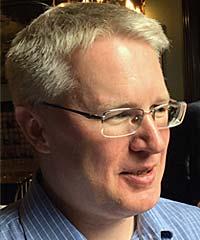 Professor of the Philosophy of Language
Tutorial Fellow in Philosophy, Magdalen College
paul.elbourne@philosophy.ox.ac.uk

I read Greats (1993) and took an MPhil in General Linguistics and Comparative Philology at Oxford (1997) before doing my PhD at MIT (2002). There I followed the interdisciplinary PhD programme in semantics, which involves training in linguistics and philosophy. Before joining the Oxford Philosophy Faculty (2015), I taught at Marlboro College, New York University, and Queen Mary, University of London.

I give undergraduate tutorials, lectures, and classes in General Philosophy, Moral Philosophy (Mill), Ethics, Practical Ethics, Knowledge and Reality, General Linguistics, Wittgenstein, and the Philosophy of Logic and Language. At the graduate level, I teach formal semantics and the philosophy of language.