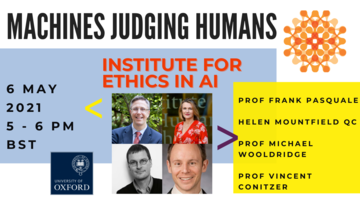 Over the past decade, algorithmic accountability has become an important concern for social scientists, computer scientists, journalists, and attorneys. Exposés have sparked vibrant debates about algorithmic sentencing. Researchers have exposed tech giants showing women ads for lower-paying jobs, discriminating against the aged, deploying deceptive dark patterns to trick consumers into buying things, and manipulating users toward rabbit holes of extremist content. Public-spirited regulators have begun to address algorithmic transparency and online fairness, building on the work of legal scholars who have called for technological due process, platform neutrality, and nondiscrimination principles.

This policy work is just beginning, as experts translate academic research and activist demands into statutes and regulations. Lawmakers are proposing bills requiring basic standards of algorithmic transparency and auditing. We are starting down on a long road toward ensuring that AI-based hiring practices and financial underwriting are not used if they have a disparate impact on historically marginalized communities. And just as this "first wave" of algorithmic accountability research and activism has targeted individual encounters with existing systems, an emerging "second wave" of algorithmic accountability has begun to address more structural concerns. Both waves will be essential to ensure a fairer, and more genuinely emancipatory, political economy of technology. Second wave work is particularly important when it comes to illuminating the promise & perils of formalizing evaluative criteria.

Frank Pasquale is an expert on the law of artificial intelligence (AI), algorithms, and machine learning. He is presently Professor of Law at Brooklyn Law School. Before coming to Brooklyn, he was a chaired professor at the University of Maryland (Piper & Marbury Professor of Law) and Seton Hall University (Schering-Plough Professor of Health Care Regulation & Enforcement). His widely cited research has been featured in top law reviews, and he has advised governmental officials on cutting edge issues in law & technology regulation.

Pasquale’s latest book, New Laws of Robotics: Defending Human Expertise in the Age of AI (Harvard University Press, 2020) analyzes the law and policy influencing the adoption of AI in varied professional fields. The book was a finalist for the American Association of Publishers PROSE awards (in the legal studies and criminology category). It attracted favorable notices from Wired and the Financial Times, and will soon be available in Chinese (both traditional and simplified), Spanish, and Italian. Pasquale has also co-edited The Oxford Handbook of Ethics of AI (Oxford University Press, 2020).

Pasquale’s book, The Black Box Society: The Secret Algorithms That Control Money and Information (Harvard University Press, 2015), has been recognized internationally as a landmark study on information asymmetries. It is cited in fields ranging from law to computer science to sociology to literature. The book develops a social theory of reputation, search, and finance, while promoting pragmatic reforms to improve the information economy. The journal Big Data & Society hosted an interdisciplinary symposium on The Black Box Society in 2020, to mark the fifth anniversary of the book’s publication.

Helen Mountfield is Principal of Mansfield College Oxford, home to the Bonavero Institute of Human Rights,  and a barrister at Matrix Chambers, where she specialises in constitutional, human rights and equality law.   She has appeared in many leading cases, including representing  Big Brother Watch in the European Court of Human Rights,  advising Chris Wylie in the light of the Cambridge Analytica revelations, and the some of the leading Supreme Court cases on human rights and equality issues.

Helen’s interest in AI, algorithms and machine learning stems from her expertise in the application of equality and accountability principles to social developments in the use of algorithms and machine learning to make decisions which affect people’s lives.   She was co-chair, with Tom Watson MP of the Independent Commission on the Future of Work in the Digital Economy, and is now a trustee of the Institute for the Future of Work, where she chaired a task force on Equality Through Transition.  The task force recommended an Accountability for Algorithms Act, which she explained in an article for Prospect co-authored with Josh Simmons. She is also a trustee of the Equal Rights Trust.

Michael served as President of the International Joint Conference on Artificial Intelligence (IJCAI) from 2015-17, President of the European Association for AI (EurAI) from 2014-16, and President of the International Association for Autonomous Agents and Multiagent Systems (IFAAMAS) from 2007-09. He was program chair for the 19th European Conference on Artificial Intelligence (ECAI-2010), held in Lisbon, Portugal, in August 2010. I was Conference Chair for the 24th International Joint Conference on Artificial Intelligence (IJCAI-2015), held in Buenos Aires, Argentina, in July 2015. In 1997, Michael founded AgentLink, the EC-funded European Network of Excellence in the area of agent-based computing and in October 2011, was awarded a 5-year ERC Advanced Grant, entitled "Reasoning About Computational Economies" (RACE).

Michael has written two popular science introductions to AI: the Ladybird Expert Guide to Artificial Intelligence, a short overview in the iconic British book series, and The Road to Conscious Machines, a longer introduction to AI in Penguin's classic Pelican series. Both books are aimed a general audience.

Chaired by Vincent Conitzer, Head of Technical AI Engagement at the Institute for Ethics in AI, and Professor of Computer Science and Philosophy, at the University of Oxford. Vincent Conitzer is the Kimberly J. Jenkins Distinguished University Professor of New Technologies and Professor of Computer Science, Professor of Economics, and Professor of Philosophy at Duke University. He received Ph.D. (2006) and M.S. (2003) degrees in Computer Science from Carnegie Mellon University, and an A.B. (2001) degree in Applied Mathematics from Harvard University. Conitzer works on artificial intelligence (AI). Much of his work has focused on AI and game theory, for example designing algorithms for the optimal strategic placement of defensive resources. More recently, he has started to work on AI and ethics: how should we determine the objectives that AI systems pursue, when these objectives have complex effects on various stakeholders?

Conitzer has received the 2021 ACM/SIGAI Autonomous Agents Research Award, the Social Choice and Welfare Prize, a Presidential Early Career Award for Scientists and Engineers (PECASE), the IJCAI Computers and Thought Award, an NSF CAREER award, the inaugural Victor Lesser dissertation award, an honorable mention for the ACM dissertation award, and several awards for papers and service at the AAAI and AAMAS conferences. He has also been named a Guggenheim Fellow, a Sloan Fellow, a Kavli Fellow, a Bass Fellow, an ACM Fellow, a AAAI Fellow, and one of AI's Ten to Watch. He has served as program and/or general chair of the AAAI, AAMAS, AIES, COMSOC, and EC conferences. Conitzer and Preston McAfee were the founding Editors-in-Chief of the ACM Transactions on Economics and Computation (TEAC).